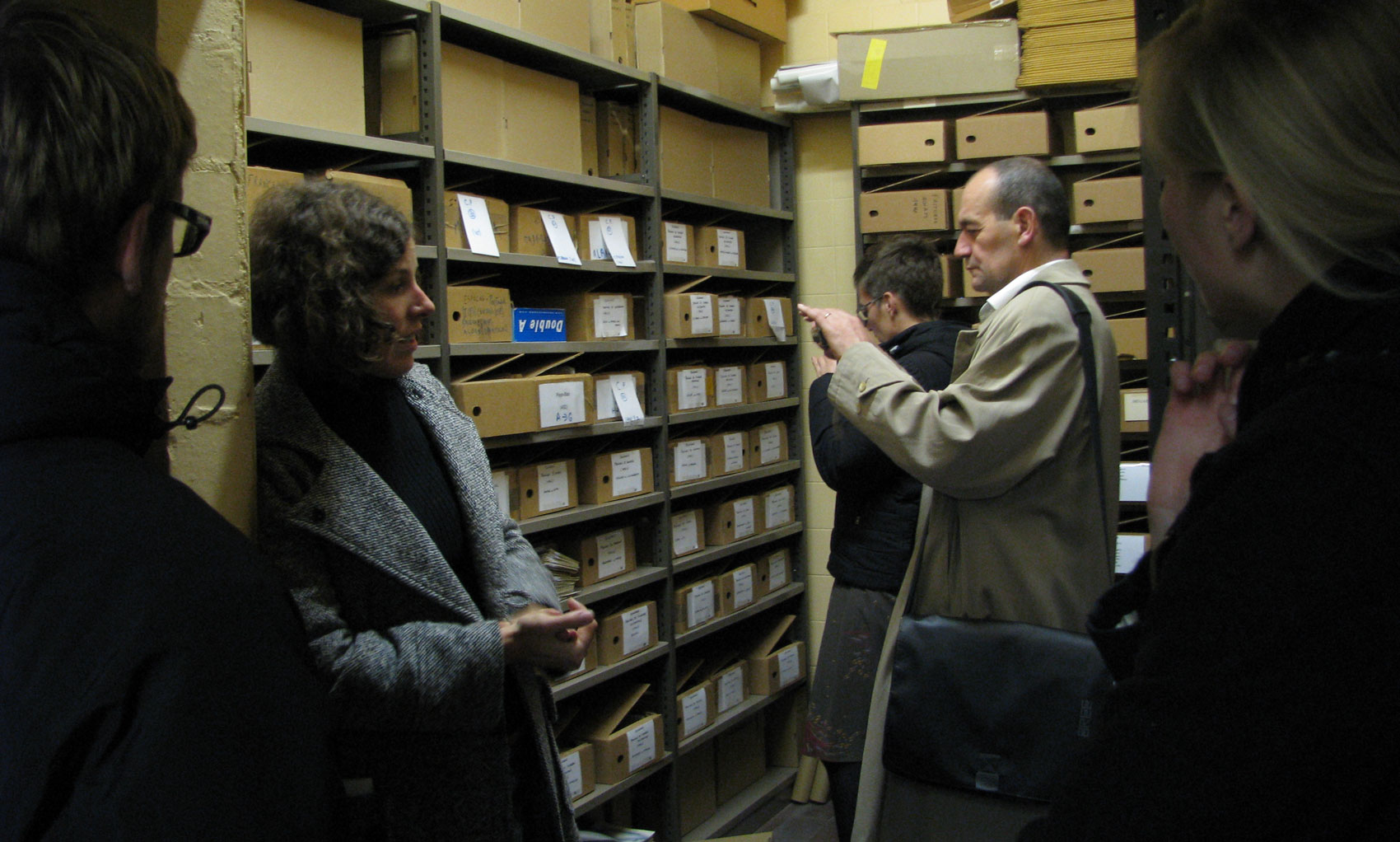 Visiting the archives of the Mundaneum, Mons, BE

Everything in the universe, and everything of man, would be registered at a distance as it was produced. In this way a moving image of the world will be established, a true mirror of his memory. From a distance, everyone will be able to read text, enlarged and limited to the desired subject, projected on an individual screen. In this way, everyone from his armchair will be able to contemplate creation, as a whole or in certain of its parts.
- Paul Otlet (published in "Monde" 1934)

Organisation: Annette Schemmel (DE) and Marjolijn Dijkman (NL) in collaboration with FRAC NPDC  and the Mundaneum

Made possible by: the Conseil Régional Nord-Pas de Calais, the Ifa and the Mondriaan Foundation.

Formatting Utopia explored the potentials and pitfalls of the internet and it's formats for knowledge organisation at the Mundaneum. The way information is organised and presented is influential for the way we perceive and understand the world.

The Mundaneum is the result of the utopian project by Paul Otlet (1868-1944) to foster universal knowledge distribution and pacifism. - Our workshops will deal with the following questions:  How is the internet influenced by different ideologies, censorship etc.? What will happen with all the online image and data archival systems in a few years? To what extent is the 'world wide' internet realising past dreams of Paul Otlet? Which are current projects from the arts and design to realise the utopian potentials of the internet?

Otlet regarded the project as the centerpiece of a new 'world city' - a centrepiece which eventually became an archive with more than 12 million index cards and documents. Some consider it a forerunner of the internet and Otlet himself had dreams that one day, somehow, all the information he collected could be accessed by people from the comfort of their own homes. The Mundaneum was originally housed at the Palais du Cinquantenaire in Brussels (Belgium). The Mundaneum has since been relocated to a converted 1930s department store in Mons (Wallonia).

An English pamphlet published in 1914 contains this description:
The International Centre organises collections of world-wide importance. These collections are the International Museum, the International Library, the International Bibliographic Catalogue and the Universal Documentary Archives. These collections are conceived as parts of one universal body of documentation, as an encyclopedic survey of human knowledge, as an enormous intellectual warehouse of books, documents, catalogues and scientific objects. Established according to standardized methods, they are formed by assembling cooperative everything that the participating associations may gather or classify. Closely consolidated and coordinated in all of their parts and enriched by duplicates of all private works wherever undertaken, these collections will tend progressively to constitute a permanent and complete representation of the entire world. (Union of International Associations, 1914, p. 116).[1]

In 1934, Paul Otlet envisioned a new kind of scholar’s workstation: a moving desk shaped like a wheel, powered by a network of hinged spokes beneath a series of moving surfaces. The machine would let users search, read and write their way through a vast mechanical database stored on millions of 3×5 index cards. This new research environment would do more than just let users retrieve documents; it would also let them annotate the relationships between one another, “the connections each [document] has with all other [documents], forming from them what might be called the Universal Book.

Otlet imagined a day when users would access the database from great distances by means of an “electric telescope” connected through a telephone line, retrieving a facsimile image to be projected remotely on a flat screen. In Otlet’s time, this notion of networked documents was still so novel that no one had a word to describe these relationships, until he invented one: “links.” Otlet envisioned the whole endeavor as a great “réseau”—web—of human knowledge.