Stardust in a Nutshell 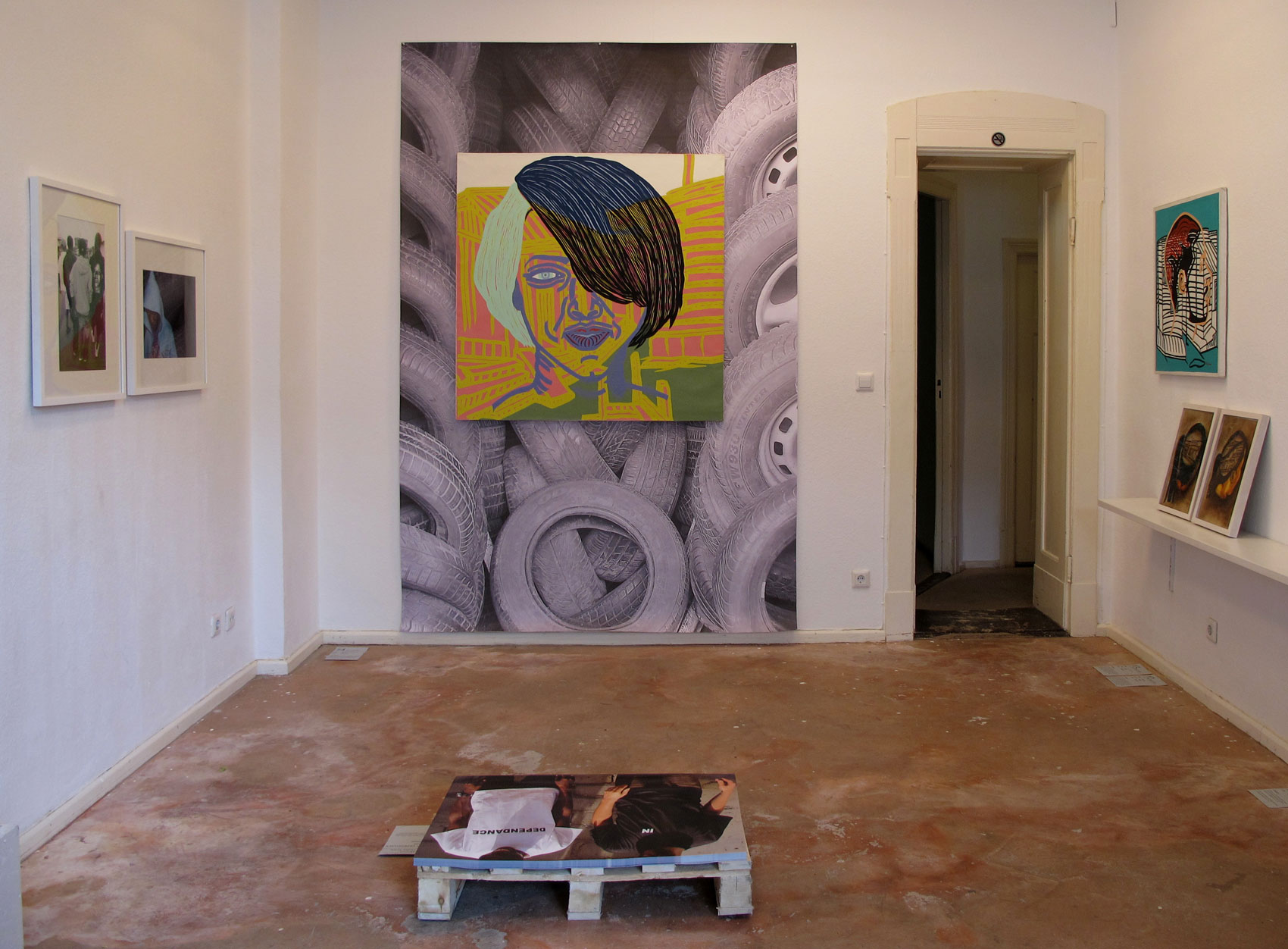 Stardust in a Nutshell: installation shot

Stardust in a Nutshell presents a selection of art works made in Cameroon in the past years, by both Cameroonian and European artists. As contemporary artists they all address politically relevant topics and share a conceptual approach to their practice. Stardust in a Nutshell is the public take-off in Europe for the collaborative project Present Perfect with involved artists from Europe and Cameroon.

Salifou Lindou (Douala) and Christian Hanussek (Berlin) have been collaborating for years. Their photo series entitled „Parfum“ represent promising names on colorful boxes and fancy flacons — Cameroonian products altogether. They contrast with the rough shelves that act as their display and offer the possibility of transformation and appropriation of exotic (i.e. Western) elegance.

On several canvases and drawings Boris Nzébo combines portraits with typical urban vistas from his city, Douala. He is inspired by a fascination for beauty culture and global pop culture, but also by his background as a poster artist for the countless small hairdresser’s shops — hubs of desire due to their celebrity photos and improvised international chic.

Patrick Wokmeni’s photos feature the girls in his part of Douala in their dizzying night life („Les Belles de New Bell“), the rappers on the streets and street rioters of the 2008 political unrest. A complex choreography of gazes in his pictures reflects the artist’s awareness for the politics of voyeurism. This is of particular importance in a context like Cameroon where a profound scepticism towards photography prevails.

Maarten Vanden Eynde from Brussels and Alioum Moussa from Douala refer to the 50th anniversary of Cameroon’s independence with their public space project represented in the form of a poster print. Cameroon was first colonized by Germany between 1884 and 1919, then by France and England up to 1960. Couples of a black and a white t-shirt bearing the work „IN“, and „DEPENDA NCE“ respectively on their front will be distributed to matches of Cameroonian and European visitors at the triennale SUD 2010 in Douala. The project’s aim is to inspire a dialogue about the recent history and the political present amongst them.

We are happy to announce the screening of the video „Vita Nova“ (2009, 26 Min) by Brussel-based artist Vincent Meessen during the exhibition’s opening. It uncovers the contradictory relationship of the French intellectual Roland Barthes with his grand-father, a colonial officer, brought forward with a compelling visuality.

Stardust in a Nutshell is the curatorial starting point for new productions by European and Cameroonian artists. The exhibition display therefor subtly recalls a custom’s office and will also include a range of inspiring objects, amongst others the historic photo album of a German „Schutzmacht“ soldier from Cameroon’s colonial era (courtesy Bonaventure Ndikung).