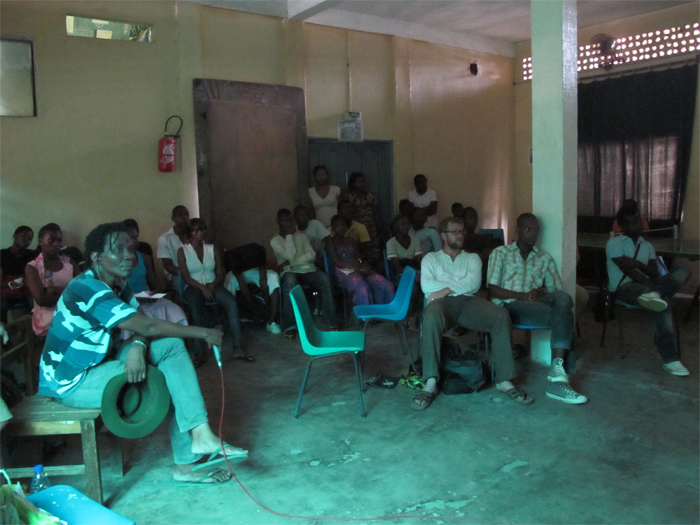 The artists Marjolijn Dijkman and Maarten Vanden Eynde and curator Annette Schemmel are exploring possibilities for future collaborations with Cameroonian artists and writers on site in Douala. After a long prelude of conversations in Europe, we are doing studio visits and are hosted by Douala’s art initiatives to screen and present artworks brought from Europe, which address the notions of memory, history and the future. Among the works presented are “Nostalgia” by Omer Fast and “Desire in Representation” by Peggy Buth. Local engagements with these themes are especially relevant with regard to the „cinquantenaire“ (50th anniversary) of Cameroon’s national independence and with regard to the spectacular celebrations that this event entails in 2010.

In the framework of this trip, we will exchange about artistic approaches and about potential contexts, content and locations for a joined exhibition in Germany, a possible participation in the SUD 2010 and about other ideas for collaboration. We will also discuss how contemporary art is produced and presented in Douala. What are the working and living conditions for artists and how do they manage to professionalize in the absence of art academies as we know them? Who is educating who, and what knowledge is being transferred? How do people in Cameroon access works of art?