The 'End To End' publication documents and summarises 'End to End' / Raversijde (2016), an artwork based on protocol and process developed by the artist collective Performing Objects (Brussels, BE). Together with numerous other participants Bie Michels, Kristof Van Gestel, Lauren Grusenmeyer and Leontien Allemeersch set up this process at Private Tag, an exhibition made by Isabelle De Baets and organised by Vrijstaat O. at the Atlantik
Wall Museum (Ostend, BE).

This publication is financially supported by Vrijstaat O. (Ostend, BE), KDG/Sint Lucas Antwerp (BE), KASK/School of Arts of University College Ghent (BE) and Performing Objects (Enough Room for Space, Brussels, BE). 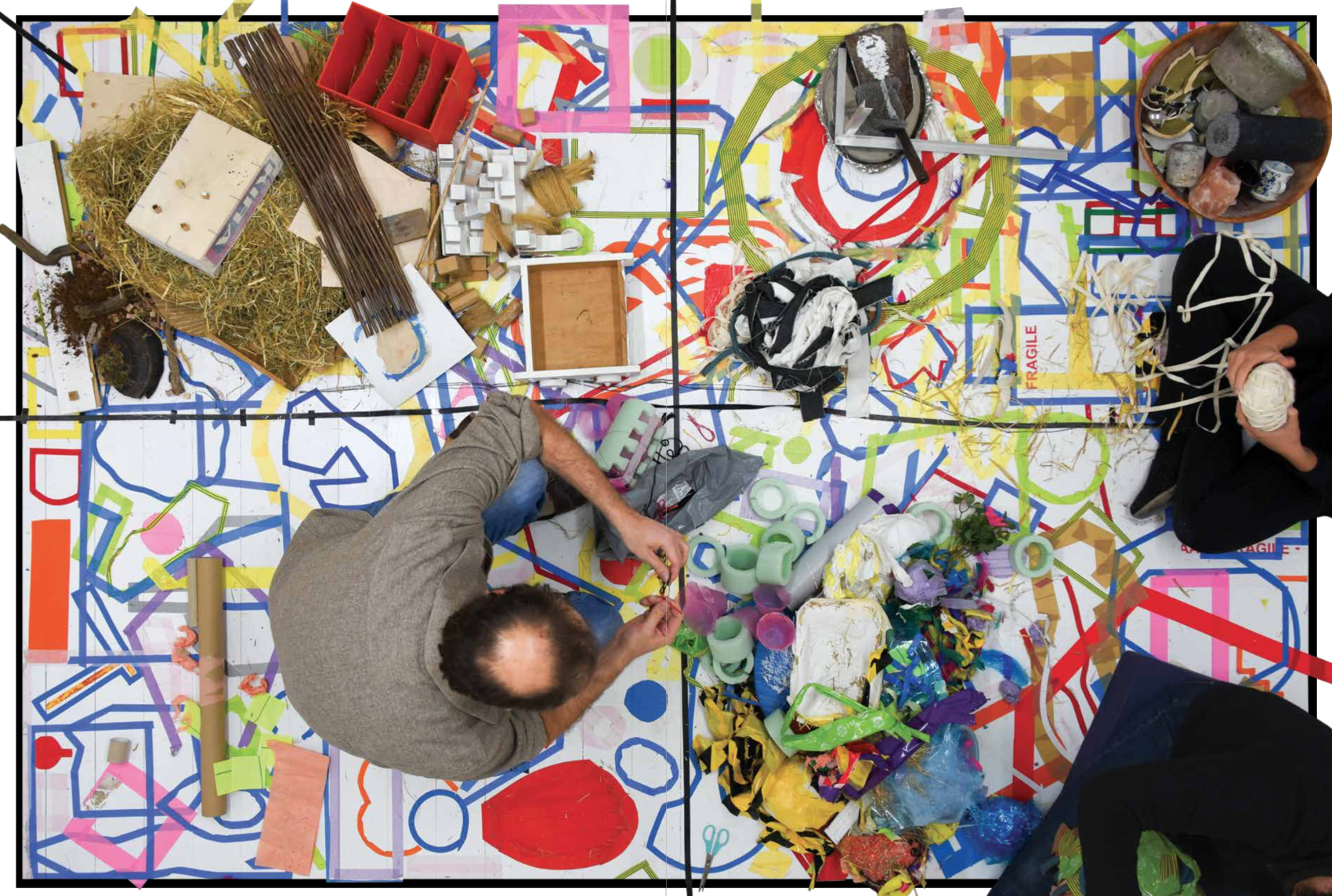 Image from the publication, End To End, 2017

The book launch will be accompanied by a presentation of  'End To End', a film screening of 'Semiophores' by Pauline M'barek and a performative intervention by Edwin Deen at the night shop in the centre of Drogenbos.

M’barek’s work operates in the transitional space between knowledge and perception, the observer and the observed, the shown and the hidden. “Semiophores” circles around imaginary objects, in visualising processes of value attribution to objects in context of their institutional presentation. Objects turn into semiophores when they are removed from their original context of use and become part of a museum collection. The more an object is charged with meaning – through exploration, measurement and evaluation – the greater its value. Thus, following philosopher Krzysztof Pomian, the artefacts are becoming semiophores, referenced objects, carriers of meaning, which are maintaining the communication between the invisible, where they are coming from, and the visible, where they are exposed to meaning. They turn into mediators of the faraway, the foreign or the past which can become visible through the objects.

‘Physical experiments at the supermarket #4', a performance by Edwin Deen at the night shop in Drogenbos, around the corner of ERforS HQ. Edwin Deen is interested in physical and cultural processes and the use of everyday objects and base materials.  ‘Physical Experiments Live’ is a continuous performance series through which he explores and shows the ‘hidden nature’ of seemingly unnatural/artificial, human made things.

The solo exhibition at ERforS by Jean Katambayi within the framework of the project 'Uncertainty Scenarios' will be on display as well.

End To End:
The End to End method can repeatedly be carried out under changing circumstances, at different locations, with different objectives and by different participants. Variations of the projects have so far been on display in China (Fei Contemporary Art Centre, Shanghai, 2015) and Madagascar (CRAAM, Antananarivo, 2016). Where this publication is concerned, the method, as a work of art, formed part of Private Tag, an exhibition organised by Vrijstaat O. (18th September 2016 – 13th November 2016) at the provincial Raversijde domain in Ostend. Isabelle De Baets was tasked with the role of curator for this exhibition, assisted by co-curators Hendrik Tratsaert and Merel Vercoutere. The artwork took over the entire bunker house, which had been especially transformed into a stark white studio for this purpose. End to End is a working method which structures a collective process within which objects are constantly being transformed. The objects created are continuously being placed in a field again, waiting for a possible new transformation. This work process takes place in silence. Things are discussed in group both before- hand and afterwards. If so required the structure is adjusted.

For this occassion in Raversijde, 'End to End' was set up by Bie Michels, Kristof Van Gestel, Lauren Grusenmeyer and Leontien Allemeersch. Participants included: Ann Dekeersmaecker, Anne-Marie Sampaio, Anouchka Oler, Bart Van Dijck, Danny Vercauteren, Dimitri Vangrunderbeek, Dries Segers, Elli Vassalou, Luis Ramos, Marijs Kempynck, Simon Van Schuylenbergh, Telma Lannoo and a number of other visiting participants helped making End to End. The work was continuously activated and transformed by four of these participants at a time for a number of hours, twelve different times through- out the exhibition.

'End to End' was created within the context of the collective ‘Performing Objects’ research project. This project was initiated by Marjolijn Dijkman and Kristof Van Gestel as part of Enough Room for Space (Brussels, BE) with support provided by Vision Forum (Linköping, SE) in 2014. The project participants experimented with objects and the different possibilities of using these interactively. ‘End to End’ took shape during the course of 2015 after workshops about ‘score’, as used in performance art and about ‘Lean Management’ at De Kringwinkel in Antwerp (BE).

Performing Objects would like to thank everyone who helped to make this process possible!