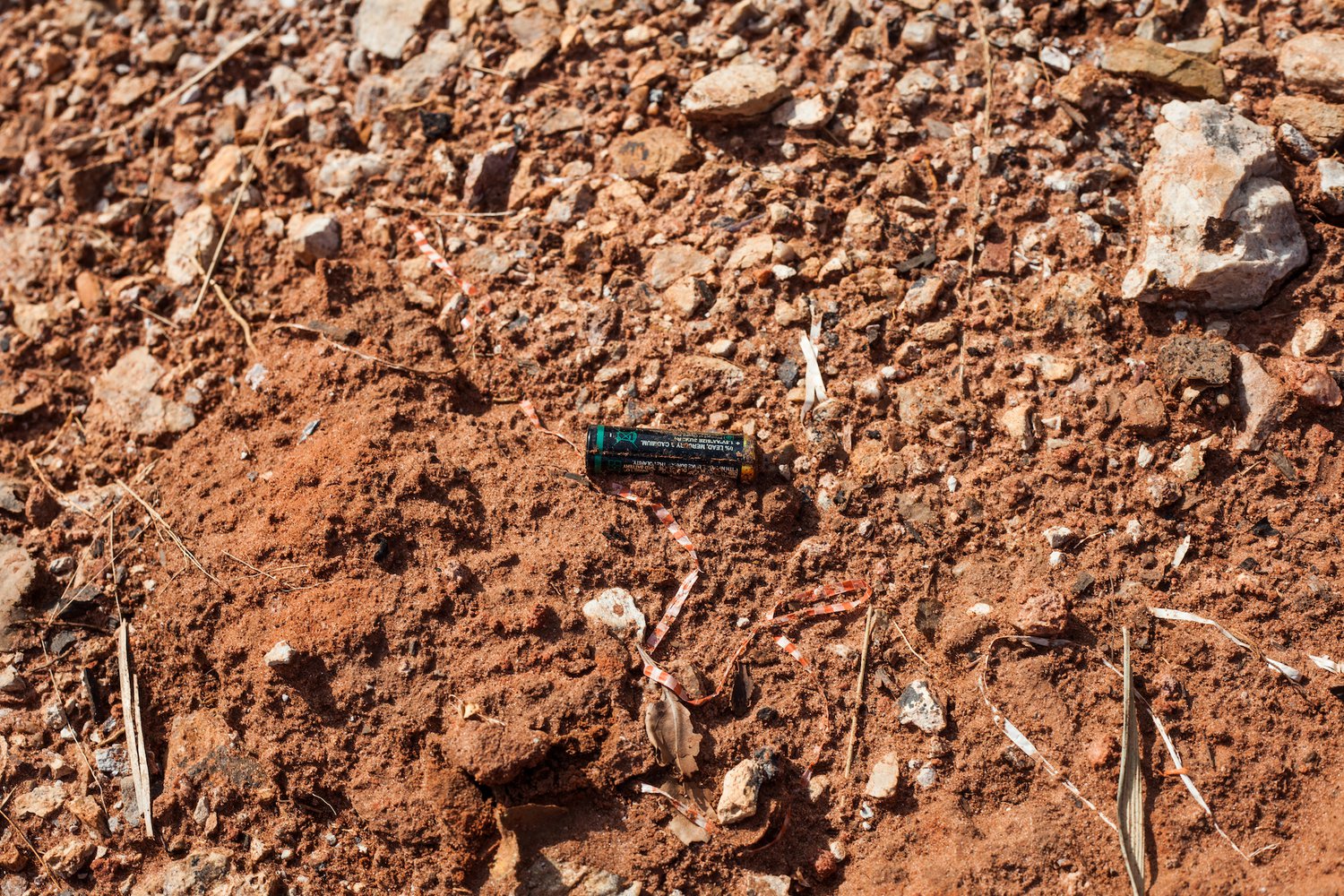 On-Trade-Off is an ongoing artistic-research project that reflects on environmental and economic implications of the extraction and processing of Lithium, the main raw material needed for the global production of Green Energy. The installation On-Trade-Off consists of a presentation of Le Vide / The Void by Georges Senga, Future Flora: Manono by Maarten Vanden Eynde and a display case with On-Trade-Off research materials.

The starting point for the research project On-Trade-Off is the raw material lithium. A naturally occurring element (number three on the periodic table), lithium is currently considered to be ‘the new black gold’ because of its crucial role in the global transition towards a ‘green and fossil fuel free economy’. Focusing on this one chemical element (Li3) allows the project to zoom in on particular social, ecological, economic and political phenomena that characterize the production processes currently experiencing rapid growth.These phenomena show striking similarities with production chains as we have known them since the start of triangular trade in the 16th century: inhumane labour in the exploitation and extraction processes; a perpetuated economic imbalance to maintain economic growth; uninformed end consumers who are unaware of both the devastating production chain behind the goods they have purchased and their afterlife in the sense that a recycling scheme is lacking.

As well as a display of related research material from the trip to Manono by Maarten Vanden Eynde, Jean Katambayi and Gulda El Magambo in June 2019, the presentation in the last phase of the Contour Biennale will include:

Georges Senga has produced a new photo series called The Void / Le Vide, developed in and around abandoned mining sites and factories belonging to Gecamines, the biggest mining company in Katanga that is currently nearly bankrupt. What void is left behind after their decline in the 1980s? What void do the artisanal miners leave behind after digging tunnels with their homemade pickaxes, which ironically look like the Tesla logo? The central themes in Senga’s work are issues linked to the idea of “memory” – the memory of who we are, what we have and where we come from.

Future Flora: Manono is a combination of a graphic translation in a copper circuit of the largest Lithium reserves recently discovered in Manono, D.R. Congo, surrounded by the outlines of the mining concession of the Australian mining company AVZ Minerals. This map is transferred on a PCB (Printed Circuit Board) and decorated with a wide variety of seeds and grains that are collected in Manono, representing transistors and electrical components. Together they create a Lukasa, or memory board, that was used by the Bambudye within the Luba Kingdom in the Democratic Republic of Congo throughout the 19th and 20th Century, as an archive for the topographical and chronological mapping of political histories, to recollect important people, places and mythical migration routes. The seeds are organised in relation to the graphical outlines of the mining concession and evoke the memory of seed collection, preservation, modification and militarisation. At the same time they function as a back-up plan for rare plant species that sometimes only grow on one specific hill or valley because of the presence of minerals in the soil. They can be used to recreate the original fauna and flora after the mining activities are over.