Field trip to Mol & Dessel, BE

Participants: Jon Thomson and Alison Craighead, Alexis Destoop, Maarten Vanden Eynde and Tuur Van Balen along with curators Ele Carpenter and Ils Huygens were given an in depth introduction to the history of Belgian's nuclear industry, properties of radiation, the HADES research lab in Mol, and the test architecture for the Low Level waste site at Dessel, Belgium. 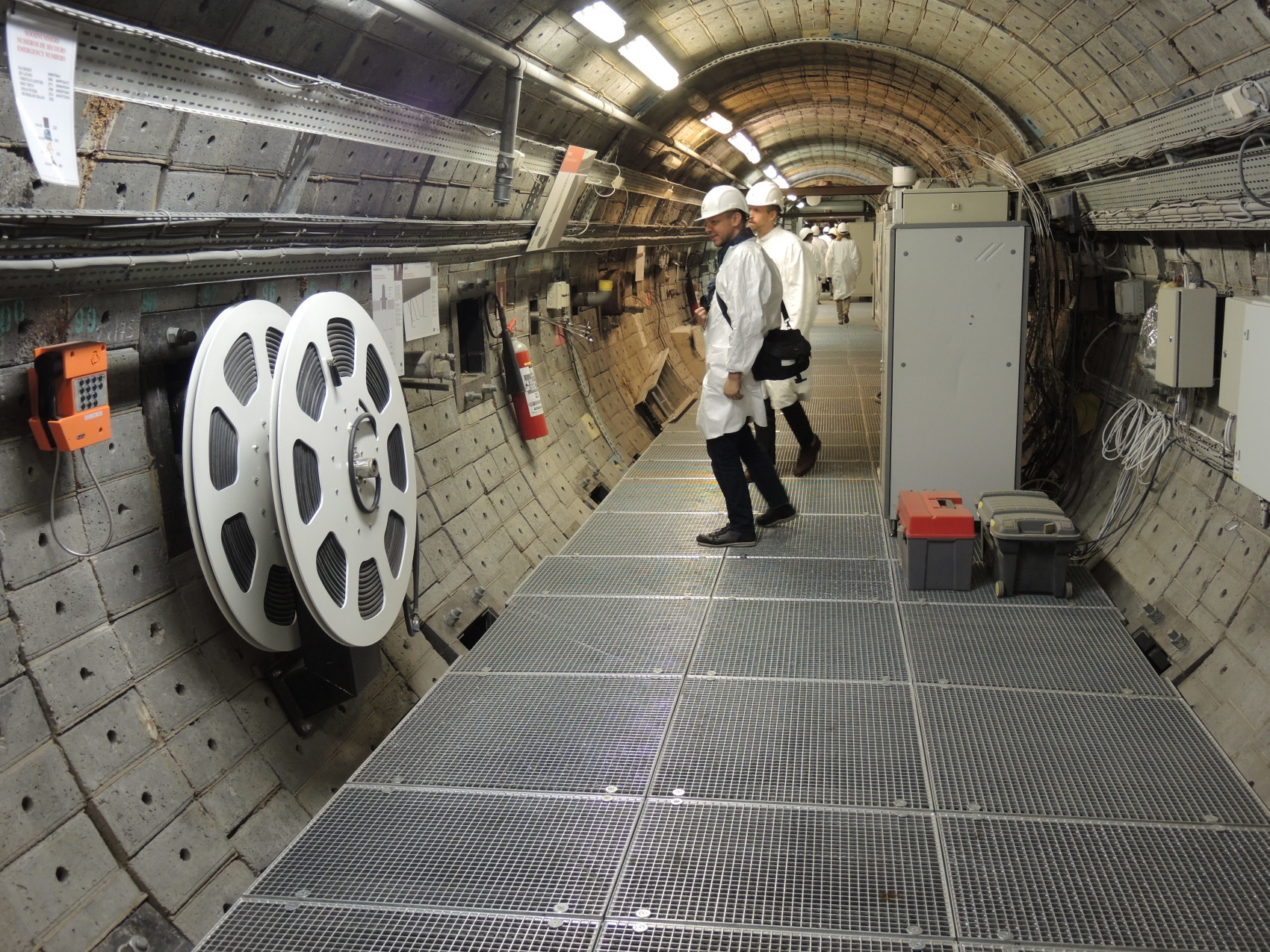 Alexis Destoop and Maarten Vanden Eynde, both involved in Triangular Trade, participated in a field trip organised by Nuclear Culture and will continue their research into uranium.

God of the Underworld, Ele Carpenter

The poetry and humour of using Greek and Classical mythological figures to name the different aspects of the work of the Belgian Radioactive Waste Agency reflects the interdisciplinary and research focused history of the Belgian approach to nuclear waste. Although security has recently increased to a military level, the early development of nuclear technology for domestic energy and medical research rather than weapons, led Belgium to develop a nuclear sector in the 1950s which still feels more like a university campus than the military fortresses found in the UK and other weapons states. Although the origins of an industry based on extraction of Uranium from the Congo is not without violence, the peaceful application of nuclear technology and the more recent commitment to phase-out creates a progressive political climate for dismantling and waste management.

HADES (High-Activity Disposal Experimental Site) is an underground research lab for high level radioactive waste in the boom clay formation at a depth of approximately 220 meters named after the Greek God of the underworld. Hades is also ruler of the 'unseen' and the dead, encouraging reflection on the potential of storing radioactive isotopes deep underground as a hidden resting place or an invisible haunting. It is this gripping fear that I recognise from my first experiences of being in close proximity to nuclear weapons and melted reactors. This suppressed panic is reflected in nervous cold-war humour: a fear of the unseen and the unknown contamination that can slowly mutate cells; the cold-war fear of 'protect and survive', the leaking plant, the crashing train, the invisible repository. The graphic scenario of the nuclear zombie, the undead waste still warm, sweating in the underworld. But as we embark on an educational programme that seeks to inform not persuade, we get closer to the realities rather than the mythologies of radioactive isotopes and their planned future life in clay. It seems that the stable geology of boom clay leads to underground storage as the best option for these long-lived emitters. This is not an earthquake zone, there's no water running through the site, the clay is pliable and oozes into gaps, it slows down the movement of the isotopes as they stick to the clay. This is a duty of care, there is nothing to fear. The tunnel was built in the 1980's and nearly forty years of research has convinced scientists and engineers that the final repository will be safe and should be built, but they are waiting for a political decision. In the meantime their long-term commitment to working in partnership with the local community has led to the co-design of a new communications centre for the low level waste storage site near Dessel, planned to be built in 2020.

At a recent nuclear culture discussion where I was talking about the concept of the nuclear pastoral, my friend Liam Sprod poignantly asked me if its possible to be at home with the nuclear, in a sense that the nuclear uncanny and the nuclear sublime come together in a localised experience. In part it is possible, necessary even, to be 'at home' with nuclear waste, not because it is politically, socially, or technically acceptable, but because it is here to stay. But this new found domesticity is not necessarily an acceptance of the production of waste, it is not a feeling of being at home with nuclear weapons or nuclear power stations. In fact I have a sneaking suspicion that embedded in the waste there is a material betrayal. For the concept of the nuclear summons all the feelings of immeasurable sublime, psychic uncanny, human rage, guilt, and betrayal. And whilst I'm enjoying learning about the basics of nuclear physics, as soon as someone gets sick or there's an accident, I know I will feel betrayed. But it is true, radiation is everywhere. In the Isotopolis education centre, we are memorised by atoms moving through a cloud chamber, little puffs, snakes and clouds drifting and dancing through the liquid. In HADES we are immersed in 30 million year old boom clay, slowly oozing through a porthole in the wall of the lab. Our sense of time shifts dramatically, here 300 years is short term waste, the long-lived fission products will need to be isolated from the biosphere for hundreds of thousands of years. In Dessel we visit the test architecture for the low level waste site. Following community consultation the engineers have added an underground inspection chamber big enough for a robot which will enable any leachate from the site to be monitored. With education comes responsibility.

So what can be the agency of art and architecture in this radioactive deep time context? We need the rituals of remembering, marking, tracing, and connecting to take responsibility for the present and communicate meaningfully into the future. We need new ways of thinking and communicating, moving away from patriarchal hierarchy and towards an interdisciplinary shared space in which women also play an important role. Artistic and spiritual practices form key human traditions which pass on knowledge over centuries, time which is counted on clocks, calendars and diaries, archived in stories connected to places, texts and objects, all presented in the Perpetual Uncertainty exhibition. But as we work towards new forms of cultural practice in response to the geologic repository project, we are reminded that the God of the Underworld is not the Goddess. It is perfectly possible for Hades to store nuclear waste underground and to find other ways to live.