Hosted by: Liu Tian
Liu Tian is a Chinese artist and curator, he researches into topics relate to artistic creation, curating, writing and visual culture. Since 2006, as an artist, he has participated in Cloud Theatre — Shanghai Odyssey (director, 2013), Reactivation: The 9th Shanghai Biennale (2012), The 3rd Inward Gazes: Documentaries of Chinese Performance Art (2012) and Design Network Asia (2006), among others. As an curator he has curated many exhibitions, including Memorandum for Gaia-The 1st PSA Emerging Curators Program (2014), Idiosyncrasies — Hanart 100 (2014), Greenbox: The Space of Media Reality (2013), What A Form: A Reportage — Wu Shanzhuan and Inga Svala Thórsdóttir (2013), West Bund 2013: A Biennial of Architecture and Contemporary Art (assistant curator, 2013), and New Folk Movement — The Reconstruct of the Commonality Living at The 2nd Songzhuang Art Festival (2006). In 2010, he established Open Matter Institute, an artistic independent research and creative project. 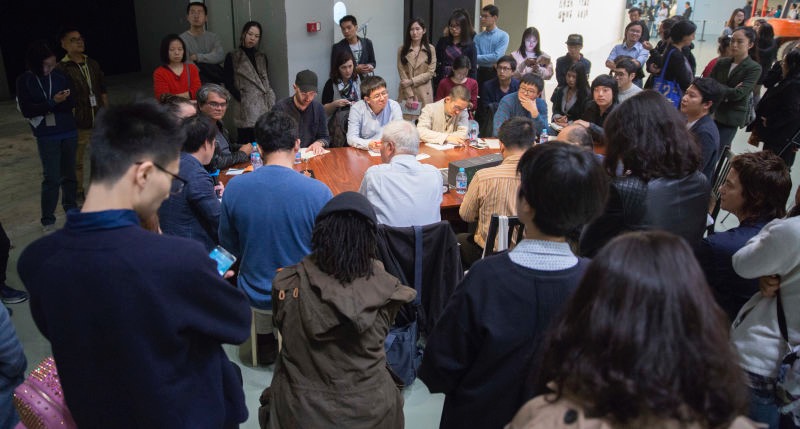 ‘Why Not Ask Again?’ The theme of this biennale is both a demand and a query. It tells us to look beyond answers. This biennale will have done its work if it gives rise to a forest of questions in your mind and a storm of desires in your heart, where the unpredictable is something to be welcomed, not feared.

Questions are like pressure points – the vital points along the meridians of the body that are crucial to health and sickness, pleasure and pain. Giving them primacy in this edition of biennale is like attending to the pressure points in the body of our con- temporary world. Three clear conceptual pressure points are identified as fulcrums for the curatorial work – Maneuvers, Disputations and Stories, with which this biennale will yield an open ended, alive, curious image of our world.

LUNÄ Talks are part of the Terminal installation LUNAR STATION