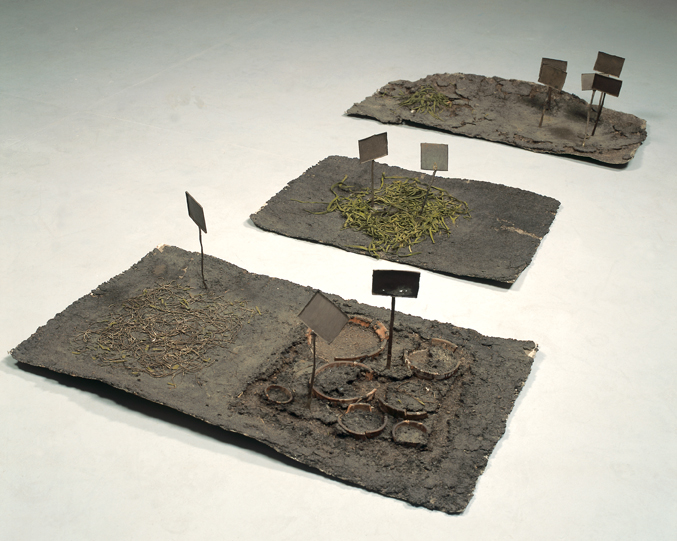 Landscaping unveils a world that could represent ours in the future. It is a collection of visions on the human made landscape, an overview of different pieces of the puzzle being part of the new geological layer we are currently placing over the world. What will remain of the present? What is our heritage for the future?

Landscaping will investigate the content of this new geological layer and will look in a subjective way at the viability of that layer. The participating artists are both politically outspoken, critical, humorist, Utopian, nostalgic, prophetic, but most of all interested in and engaged with the new landscape which we created ourselves in the past centuries.

Centrally in the exhibition there is the work Hofkens (1977) by Panamarenko, for the first time on view again after a very intensive restoration at SMAK, Ghent. Three thick sheets of cardboard of about 1m2 are filled with a variety of inorganic trash and debris. From a prophetic kind of future vision Panamarenko nostalgically tries to restore and reconstruct the long lost city-gardens. These city-gardens functioned as urban alternative for live on the countryside and provided additional food for the unfortunate. By the steady increase of city residents (in 2008 a remarkable swing took place: the majority of the world population lives now in a city) the necessity to have physical contact with the earth is gone. People are used to this new, self-created landscape and recognize the urban environment as their natural habitat.