Direct link to 'Of Genetology'

or-bits.com presents quarterly web-based group exhibitions accompanied by a rolling blog. Each exhibition originates from the exploration of a word and culminates in a media crossover, in which the editorial and miscellany of artists' works are what remain visible of the process of production. The aim is to suggest links between various cultural areas; creating a system in which the artworks and their idiosyncratic languages, the blog posts and their critical trajectories, stand for themselves while being connected to a centre point.

or-bits.com's mission is to support the production of new works and writing and instigate an exploration of the creative and critical possibilities of the web as language, medium and subject. Its activity spans from web-based exhibitions to related OFFSITE PROJECTS, curatorial collaborations and talks. 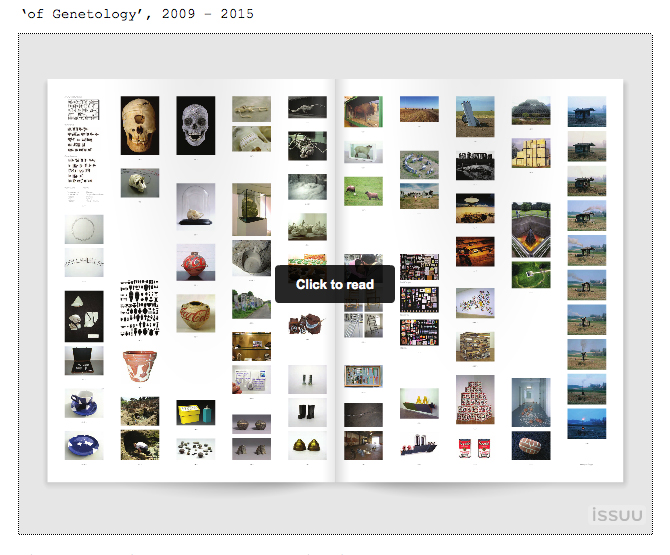 While watching a film on my laptop I found myself fast-forwarding it.
And I fast-forwarded it because, dissatisfied by what I was seeing, I wanted to get to a more interesting scene. In truth, I presumed that ‘nothing was going to happen’ in that lapse of time.
As soon as I noticed this, I paused the film and thought: what would have happened if I had watched Andrei Tarkovsky's Solaris (1972) for the first time on Quicktime, or Last Year at Marienbad by Alain Resnais (1961) on YouTube?
It might have been a very different experience. Most likely, I would not have appreciated the gradual disclosure of a lake with undulating strands of seaweed in it, or endured the lingering shots of a camera panning for four minutes around a non-narrative theatrical scene.

My impatient eye, and perhaps my in-need-of-constant-stimuli brain, would have given in to the temptation of exploiting the possibilities offered by these new technologies.
If the above had happened, I would have almost certainly missed out on what are to me two compelling examples of sci-fi and post-modern drama films. I would have taken a fallacious short-cut, missing out on their alternative worlds and complex timelines, I would have watched them in acceleration, or better still, with an accelerated mind.

But what are these possibilities?

When using multimedia frameworks (i.e. Quicktime) and video sharing websites (i.e. YouTube) - along with my laptop - I am brought into a different relationship with time; or, in other words, a different perception of time.
My viewing habits are different.
My visual expectations are different.
My assumptions about the content of what I am viewing are different.
The possibilities I am alluding to are not just to be associated with easy fast-forwarding. They derive from new viewing conditions; new modes of connecting with moving images.
The flow of images is now in front of me in what is very much a one-to-one personal experience. My relationship with the film is also filtered by the fact I am on a laptop, which presumably is connected to the internet and, perhaps, has a web browser open on a video sharing website – with all the implications that having a suggested list of related films next to the one you are watching raise –.

It is this whole viewing context that alters my relationship with the film and its inner time. In this context my brain becomes attuned to the idea that ‘direct and straight action leads to a gratifying (and immediate) result', 'the next thing might be better'. Or, in other words, my state of mind becomes one in which I want to get to something (precisely, the next most interesting thing) by the pressing of a button.
A sort of,‘press-and-instantaneously-get approach'.

Hence, how would a contemporary Tarkovsky or Resnais respond to this different viewing context, to my new perception of time, or to my expectations for a faster and denser tempo and for 'what is next?'?
If my current reality of time is somehow accelerated, what should the standards against which I determine this change in speed be?

Round 2: SPEEDS OF BEING AND REAL TIME

In the Star Trek episode Wink of an Eye (1968), Captain Kirk is trapped in acceleration, while the Enterprise is in a force field and stuck in suspended animation.
After sipping a coffee containing a radioactive substance from planet Scalos, Captain Kirk vanishes without trace from the crew's sight, but he is still physically on the Enterprise and can see the crew members moving, albeit in slow motion. To cut the story short, while the crew is in their usual state (or speed), Captain Kirk is in a different one: he is accelerated. They all exist in the same place but in parallel timescapes.
From the point of view of the crew, the future is ‘where captain Kirk is' - and is only perceivable in the insect-like noise emitted by his state of acceleration- . Whereas, from Captain Kirk's perspective the crew is in the past – which he understands as a gone-present and not-experienceable scenario.
In the frozen present of the Enterprise, past and future coexist, but they are differentiated. Their coexistence is illustrated as the consequence of an interference of the observer in the observed; in short, past and future are shown to be relative to the speed at which they are perceived.

In the everyday, time is perceived as a progression of phases, as a passage from one state to the other. Past memories merge into the present; a present in which the future exists as an element intrinsic to our intentionality. As economist Mario J. Rizzo wrote apropos of the dynamics of real time (i.e. the consciousness of time), each of “the phases of a process of becoming” – that is being and acting over a period of time - “has no full meaning except by reference to the other phases”, both from a backward-looking and forward-looking perspective. In the process of time perception, memory is “responsible for the sense of change – of novelty” of the present moment, and our expectations are what bridge “that which is and that which putatively will be”.

In the multifarious timescape of the Wink of an Eye, acceleration is a pretext for presenting past, present and future in the form of various, but separate and fixed, speeds. However, in real life, not only do past and future coexist in the present moment, they also merge with it in an unquantifiable system of relations. The impossibility of distinguishing or measuring these relations originates from the fact that the present moment is deeply rooted in our consciousness of time, and thus the 'speed of being'.

But what would happen if our speed of being, as a whole society, was altered by an overall change in the perception of time; a change given by the cultural context in which we live, e.g. that of an accelerated society in an accelerated time? If this is the case, would our consciousness of time change with it – and would we be able to clearly see things as they are and envision how they may possibly become?

Round 3: BEYOND THE SCOPE (AND TEMPO) OF THE PRESENT

Newspapers, magazines and blogs all over the Western world have largely been debating on our inability to 'hold on for longer than a click' in the quotidian rush to keep up with the flow of information (or services) that the WWW inexorably brings us, in the form of data packages ready to be consumed and redistributed.
It seems that our current technology-absorbed society has become preoccupied with catching up with the sped-up scenarios induced by digital technology. We are losing focus on the present and, above all, the ability to clearly speculate about the future.

This is probably true since in day-to-day experience visions of the future are interlocked with, and result from, visions of the present – in this instance, the 'accelerated here'.
Hence, we may have started to avoid envisioning real futures because the future is unpredictable. Or, in other words, because envisioning combinations of an unexpected array of possible states does not go hand-in-hand with the belief that 'direct and straight action leads to a gratifying (and immediate) result'.

But what is this 'accelerated here'? Where does it stem from?

By definition, acceleration is a vector, it is the rate of change of velocity over time. And in the everyday it can only be postulated through referring to a fixed point, e.g. through comparing the velocity of an element against the velocity (or, stillness) of another one.
I wonder, once more, against what standards do we assume that society is getting faster and faster, that it is accelerating?
It seems that our current ideas of an accelerated society derive from understanding acceleration as a state of being which originates from measuring the speed at which technological advances occur against the speed of what is considered as standard time.
But acceleration is a relative condition because acceleration is not a state, nor a constant, nor is it fixed.

In a talk titled The Singularity: Your future as a black hole, the science fiction author Bruce Sterling discusses acceleration and the way it ties in with ideas of (and for) the future of society and culture. By starting from an illustration of the notion of Singularity , Sterling presents acceleration as an image that has often been connected to “sci-fi prophecies of doom” or apocalyptic scenarios. In fact, within the science fiction genre, acceleration has been recurrently discussed as an “enemy” that removes things from the possibility of being comprehended in the present. And this is because things become “too fast to be understood”.
But Sterling goes on to say that the 'acceleration of society' widely present in sci-fi narrative - and widely debated in the mass media - is also relative and “subject to question”. The argument being that, for instance, if “computer networks have accelerated notably, other networks, such as electrical power networks, water networks […] have not. […]”. In fact, none of these have “radically accelerated beyond” the possibility for humans to put up with them and their technology.

That said, if all this recent talking about 'being accelerated' is just relative to the way we correlate with technology (often in fear because something is new, or in distress because something is different), there is a question that urgently occurs to me – and here I am quoting Jonathan Griffin in Future Conditional – how do we “resurrect the lost art of looking forward”?
And how do we do this without getting trapped into this supposedly technologically accelerated reality, which is dominated by the equation of future with acceleration, of acceleration with 'more and faster', of faster with continuous quest for fulfilment?

The idea that our society will head like a meteor in acceleration towards a point of not return – as suggested by much of the reports and speculations of the mass-media - is just too simple and gloomy to me to be even taken into consideration.

The future has not arrived. Not yet.
And we will never be accelerated far beyond our power to see things and envision new possibilities.
We will make changes, and we will go ahead, without regretting the 'gone-present'.
Let's not be so stubborn.

1 Mario J. Rizzo, Real time and relative indeterminacy in economic theory, in Time in Contemporary Intellectual Thought; Elsevier Science; 2000.
2 The talk is part of the series Seminars about long-term thinking organised by The Long Now Foundation; Conference Center, San Francisco, California; 11 June 2004.
3 Ibid. Singularity is a concept introduced by science fiction writer Vernor Vinge in the early 80s, and it is based on the “prophecy” that “someday there will be an array of technological advances so quick that they will exceed human intelligence”.
4 Jonathan Griffin, Future Conditional; Frieze, May 2009